1.08 Interlude: The Game of Horseshoes

The pitchfork made a familiar noise as it met resistance in the hay. Jack exhaled sharply as he leveraged his strength to scatter some of it for the horses that were grazing around him.
"Put your back into it, come on now!" It was Nicky who jeered at him and Jack swung the hay wide, hitting him with it which got an annoyed response in return. "Hey! Watch it!"
Jack chuckled, and prepared to whip out the you're supposed to be helping too speech when his gaze snapped to the sound of rich laughter. 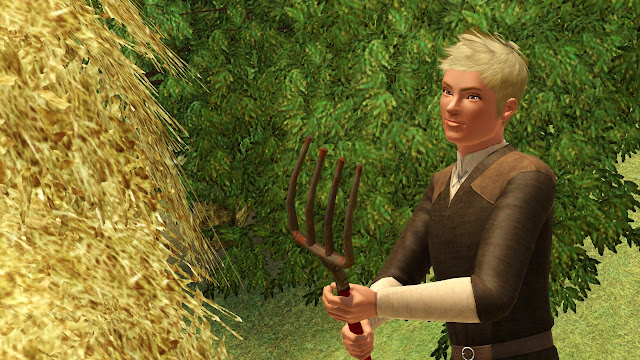 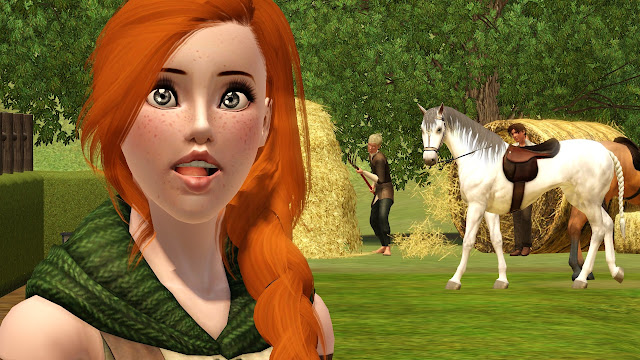 It was hard for him not to stare, and perhaps she knew that. No, she certainly did. Soliana's gaze turned and her eyes sneakily met his with a charming smile that could kill a man by stopping his heart.
She absolutely knew her charms and used them well. He could feel the ring she gave him burning a hole in his pocket.
He almost lost it in the hay once and he never wanted to risk that again. It panicked him far too much. 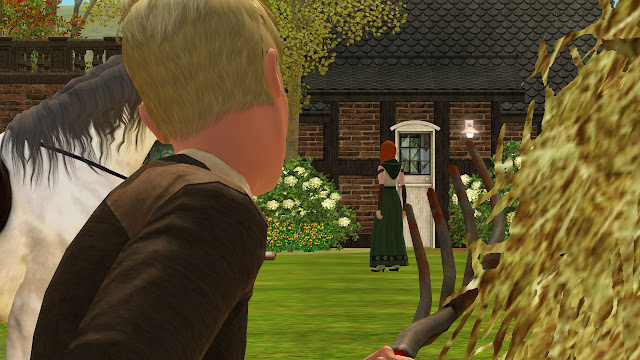 Jack tried to focus on his work but it was near impossible. Soliana leaned on one foot, her hip coming out slightly as her beautiful, calculating eyes glanced his way again. She was having far too much fun with him. It was a game for them.
A game of horseshoes. 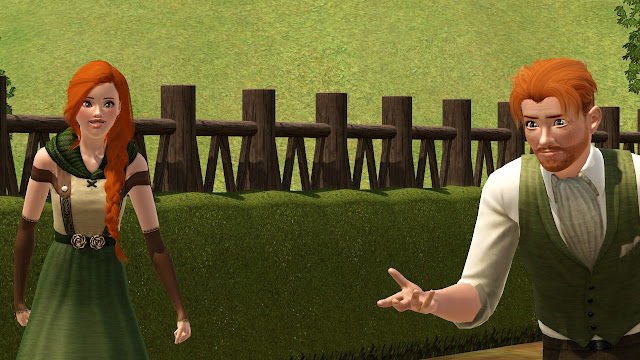 She played with her father at least once a week right at the time he would be working by the hay. The Lord Cristopher was highly competitive and his only daughter was even more so.
Soliana had not cared that he was a stable boy. He had been his entire life - his mother was the head cook and he never knew his father. The Lord and Lady Ademara protected his mother from scandal and even gave him a job.
Some would call it stupid to risk everything he had for something that would, theoretically, never be his. 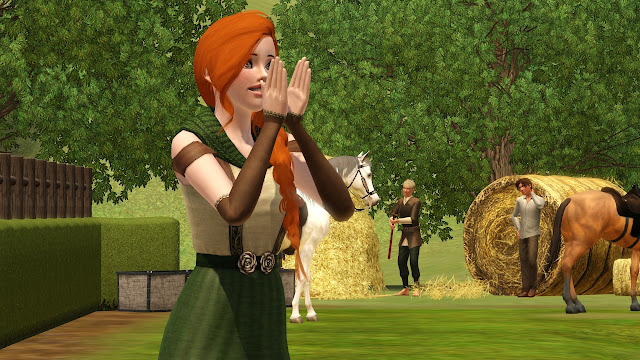 But they did not know Soliana. She clapped and cheered as her father missed the stake by a mile. Her voice carried on the warm, afternoon breeze. "You're losing your magic touch father!"
The Lord turned and gave her a teasing glare. "Maybe if you would stop jeering at your old man, you little cheat."
Soliana clenched her fists, her face set in determination. "You do it worse! I am NOT a little cheat!"
Jack chuckled internally. Never question Lady Soliana's intentions or integrity. Her father will never hear the end of it. 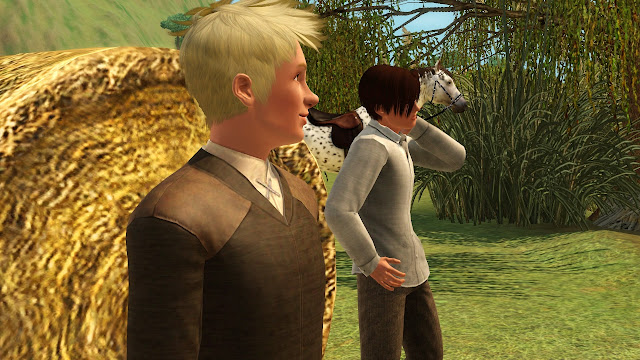 "Hey, loverboy. Maybe if you eyed the hay like you do the Lord's daughter our work would be done by now!" Nicky taunted.
Jack shot him a quick glare. The work certainly felt never-ending when Soliana continued stealing glances his way with her startling gaze. "Maybe if you got off your high horse and helped, your majesty, we would've been done an hour ago."
"Hey! I'm supervising. Besides... when you up and marry the Lord's daughter and take your place above me I won't be able to boss you around no more." Nicky wiggled his eyebrows at him.
It was a long running joke amongst the servants, but despite them taking jabs they were all incredibly happy for them. 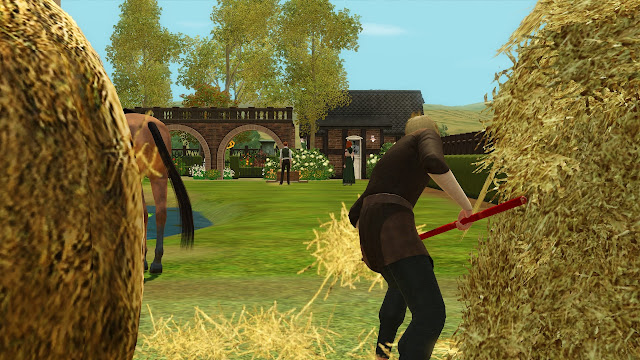 The Lord and Lady Ademara knew what they were getting into when they permitted and encouraged his friendship with Soliana as children. They had worried for her boredom and loneliness given that they owned the land the furthest from town and other children.
Jack hadn't been sure of what to make of Soliana. He had been two years older than her at 7 years of age while she was 5, yet she stuck to him like glue, following him everywhere.
Now it was him that seemed to be chasing after her. 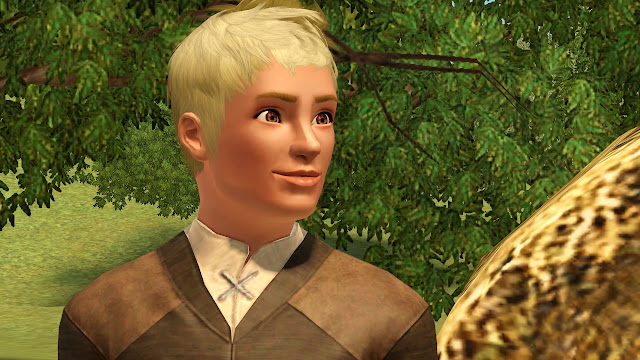 He would follow her to the ends of the earth if that's what it took.

Lady Marie Ademara fanned herself delicately as she sat, watching her daughter's game. She was too stubborn for her own good. Foolhardy. Boisterous. She had been Marie's little miracle. 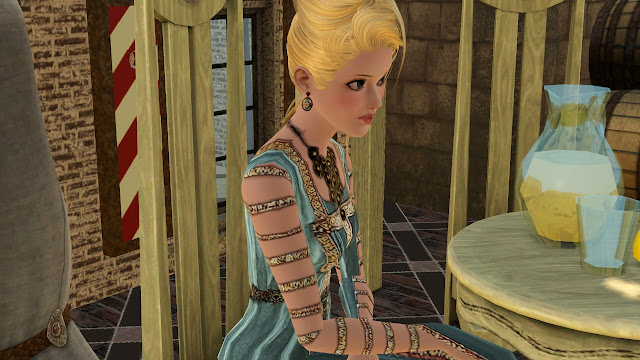 Soliana was the spitting image of her with Cristopher's hair and eyes.
His otherworldly-stubbornness too. 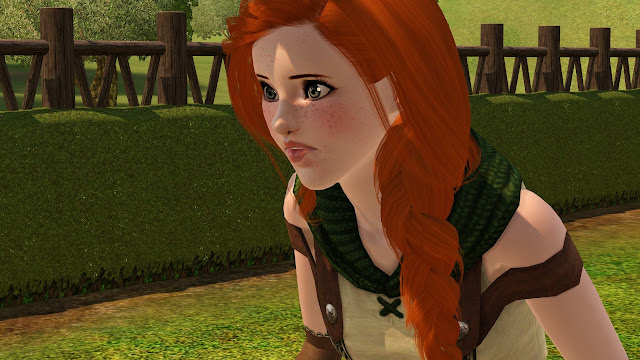 Marie had hoped for a feminine daughter. Demure. Gentle. Understanding of her place in the world. She had hoped for it so that Soliana would not need to know the harshness of being forced to be those things. Yet, Soliana was none of those things and Marie secretly loved her all the more for it.
At the very least her daughter would not be shuffled into a loveless marriage to a neighboring town to bear a few children and die on her birthing bed. She had too much fire for that.
Marie could hear Cristopher's taunts as her daughter missed the stake and she smiled as her daughter turned and gave him a warning glare.
Marie shook her head before speaking levelly. "She's far too hot-headed most days, I swear that boarding school taught her nothing." The statement was double-sided. Any ears that heard it would assume the initial meaning, whereas one, particular set of ears would hear the intended meaning. 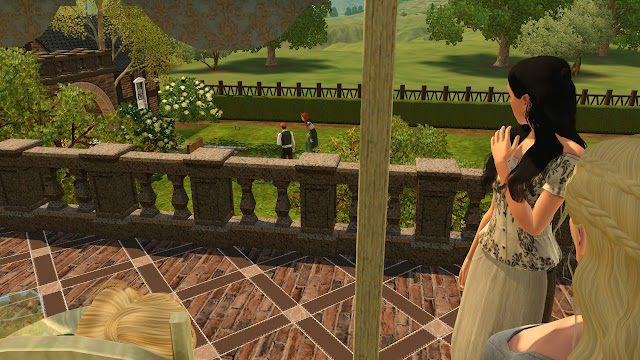 Alysia Demarco laughed lightly next to her where she stood. "She's as fiery as her hair, my lady."
Alysia had been one of Marie's closest friends for as long as she could remember. Marie had grown up much like her daughter - alone. Her elder brothers had wanted nothing to do with her, so the only company she had was her lady in waiting, Alysia.
They were 18 when wartime came. Marie had sent her newly-wedded Cristopher off to do what most heads of noble houses' do - become a General - and she stayed behind with Alysia, the servants and the house. Soldiers came and exited the towns, stirring up trouble and bending to no one.
It had neared the war's end when Alysia had gone into town for groceries one day and did not return until much latter, bruised and assaulted by those insolent soldiers. When her moon's blood did not come, her fate seemed sealed. 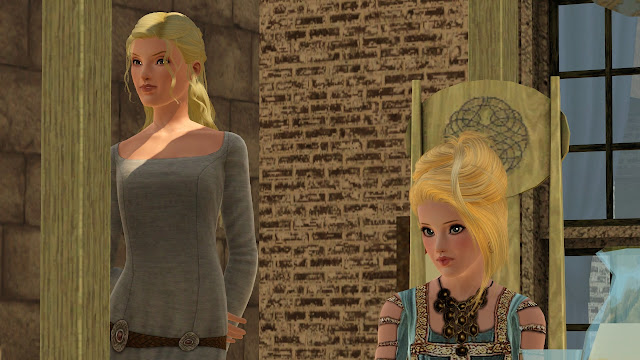 Marie refused to see her thrown out, as every other house - even the one from whence she was born - would have. Marie, herself, struggled with conception, and there had been a moment where she briefly contemplated raising Jack as nobility - as her own. Yet she couldn't do that to Alysia - she couldn't ask that of one of the only people dear to her.
Luck had favored her though when two years later she, too, would notice her moon's cycle had not come. The pregnancy had been horrible - Alysia had made it look easy. Or perhaps her's was easy by comparison. There were many points when the doctors feared she would not make it.
They had all spouted different gibberish, names she never remembered, telling her that her child would be born dead or worse.
That was not her Soliana, though. 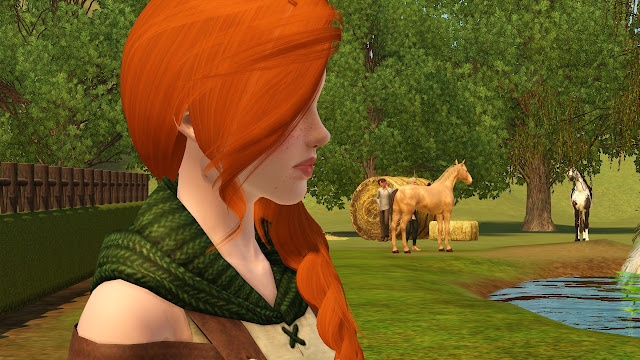 "Your son is quite taken by her." Marie mused as she fanned herself once more. She hated the heat. It was a symbol of her gilded cage. She remembered being a few years younger than Soliana, stripping down to her knickers and jumping in the ponds outside of her house with Alysia in tow.
She was not allowed those experiences anymore. They were not lady-like.
"I imagine it would be hard not to be, my lady. She is, after all, her mother's daughter." Alysia had not looked at her but they both shared the same secretive smile. "Perhaps we'll see them married after all."
Marie did not look away from her daughter's joyful reaction at hooking the horseshoe to the stake. "Oh, I'm most certain we will."

"Lucky shot!" Soliana's father shook his head, yet he smiled warmly at her and she beamed.
"I told you I was going to win it today! I could feel it in my bones!" Soliana grinned. 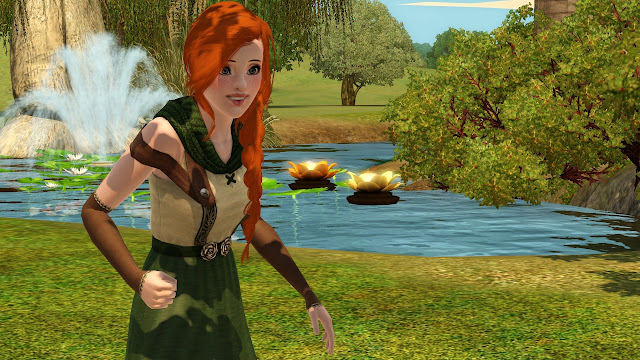 "One lucky horseshoe does not grant you the game in my books." Her father grumbled teasingly. "Besides, it's clear I let you have that one."
Soliana rolled her eyes dramatically. She would win two games today if she played her cards right. She picked up the next horseshoe and bent at the waist, biting her lip to resist grinning as she knew exactly the angle she gave her darling Jack. 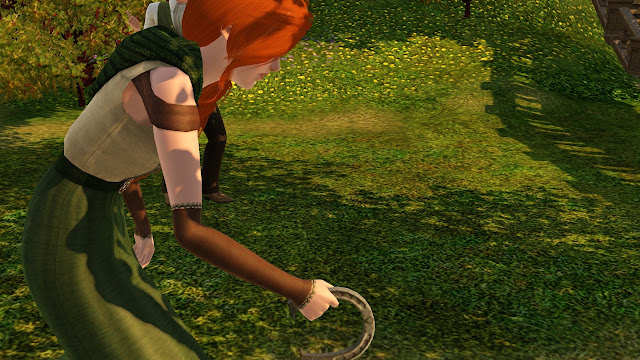 She wasn't sure which game was more fun to win at this point. She focused on her target and tried to not think of the face her Jack was making in that moment. It was very hard, as telling herself not to think of him only made her think of him more.
He had grown bolder in the past year and it elated her.
She would marry her Jack no matter what her father told her. She knew she had her mother on her side - even if her mother only told her so with her secretive smiles and hushed whispers to Jack's mother. 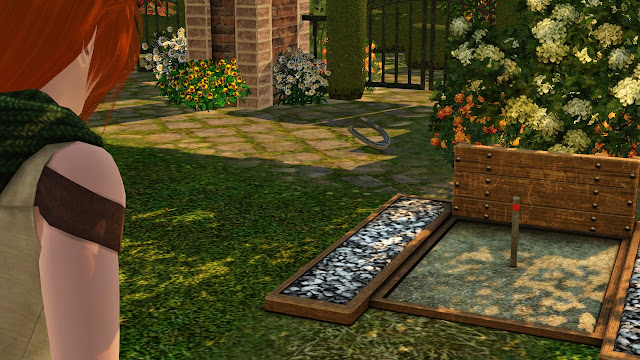 She gripped the horseshoe when the sound of a twig snapping off beyond the fence caught her ear and startled her slightly, causing her to send the horseshoe off it's mark.
Her gaze snapped out to the open field, not even looking at where the horseshoe landed and her father was laughing, making a comment about how luck wasn't helping her now. 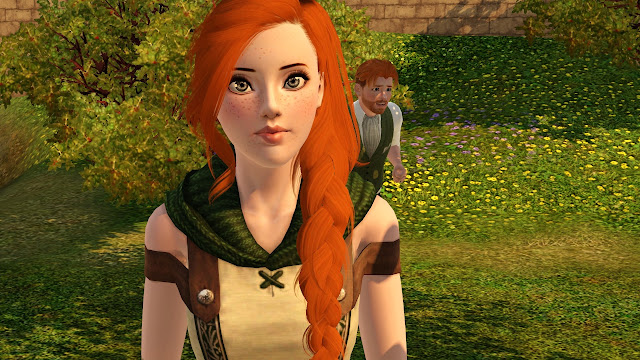 Something chilled her bones as she caught the flash of something red just over the fence. Red hair and brightly colored. Was it a man? How unusual. His form became clearer and she took a mindless step back. In an instant the brightly colored man vanished into thin air and Soliana was released from the grip that held her.
Had he been staring at her?
Had he even existed?
She shook her head. The heat must be getting to her. She turned her gaze back towards the game where her father was lining up the next shot. 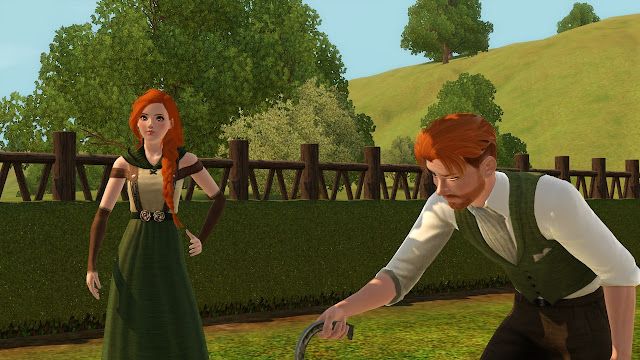 Her father's horseshoe made a clunk as it wrapped around the stake, giving him the win for the game yet Soliana wasn't paying attention to it anymore.
Whatever or whoever that was had disappeared. He was gone and Soliana didn't need to worry about it but her body still felt chilled.
She got a bad feeling that something dark was coming - she just didn't know what.